Hello one and all. Currently living out of my suitcase, managed to have a lovely chat with the folks at The Goan recently.

The full interview with mr. NObody. 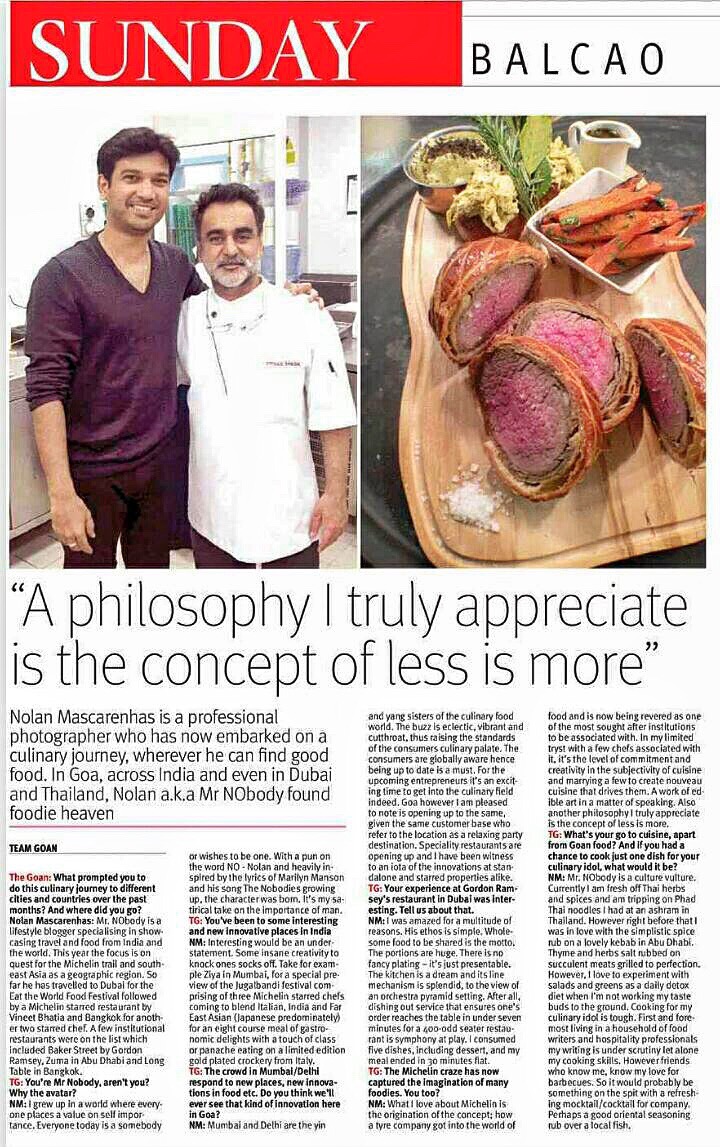 What prompted you to do this culinary journey to different cities and countries over the past months? And where do you go?

mr. NObody is a lifestyle blogger,showcasing travel and food from India and the world. This year the focus is on quest for the Michelin trail and South East Asia as a region. So far he has travelled to Dubai for the ‘Eat the World Food  Festival’ followed by a Michelin starred restaurant by Vineet Bhatia and Bangkok for another two starred chef. A few institutional restaurants were on the list which included Bread Street by Gordon Ramsey, Zuma in Abu Dhabi and Long table in Bangkok.

You’re mr. NObody,aren’t you? Why the avatar?

I grew up in a world where everyone places a value on self importance. Everyone today is a somebody or wishes to be one. With a pun on the word NO- Nolan and heavily inspired by the lyrics of Marilyn manson and his song ‘The Nobodies‘ growing up, the character was born. It’s my satirical take on the importance of man.

You’ve been to some interesting and new innovative places in Mumbai/Delhi, tell us about them.

Interesting would be an understatement. Some insanely creative, to knock ones senses silly. For example, Ziya in Mumbai – for a special preview of the Jugalbandi festival comprising of three Michelin starred chefs coming to blend Italian, India and Far East Asian (Japanese predominately) for a 8 course meal of gastronomic delights, with a touch of class or panache eating on a limited edition gold plated crockery from Italy. A true master piece of opulence and flavorsume creativity; indeed.

The crowd in Mumbai/Delhi respond to new places, new innovations in food etc. Goa doesn’t have that big a market base, so do you think we’ll ever see that kind of innovation here?

Mumbai and Delhi are the yin & yang sisters of the culinary food world. The buzz is eclectic, vibrant and cut throat thus raising the standards of the consumers culinary palate. Restauranteurs bring their ‘A’game, day in and out in order to survive, let alone thrive. The consumers are globally aware- hence being up to date and abreast of the latest happenings is a must. A concept is only good for an few years, at most,as most customers fatigue of the same as soon as they have adopted the same.  A few restaurants however have stood the test of time and retained their legacy till date. For upcoming entrepreneurs it’s an exciting time to get into the culinary field indeed. A challenge ,so to speak with a huge payoff if done right. Goa;  I am pleased to note is opening up to the same given the same customer base who flock to the location as a relaxing party destination. Speciality restaurants are sprouting up and I have been witness to an iota of the innovations at standalone and starred properties alike. So, I am quite pleased.

With the advent of social media and the Internet, identifying a Michelin recipe demonstration and trying ones hand at it, has become accessible. Many creative chefs here have showcased their wares which I have highlighted in a dedicated article on my blog.

Your experience at Gordon Ramsey’s restaurant in Dubai was interesting. Tell us about that.

For starters, no food was thrown out the kitchen, neither did it have anyone leave for the main door crying. Then again its probably cause he was at the Oscars during my visit there.

On a serious note, I have had a brief meeting with him earlier and he is a gem of a person. I was amazed for a multitude of reasons. First, the simplicity in a world of complexity and too much happening on ones plate. His ethos is simple. Wholesome food to be shared is the motto. The portions are huge. There is no fancy plating-just presentable.

The kitchen is a dream and its line mechanism is splendid to the view of an orchestra pyramid setting. After all dishing out service that ensures ones order reaches the table in under 7 minutes for a 400 odd seater restaurant- is symphony at play.

The little nuances- details from subliminal design to belt buckles of the server being the Union Jack flag, adds the finness to a well oiled machine and keen eye. 5 dishes consumed including dessert and my meal ended before it started- In 30 minutes flat. Quite an interesting case study.

Tell us about Michelin and its latest craze that has gripped many foodies around.

It’s interesting you ask that question. What I love about Michelin is the origination of the concept. How a tyre company got into the world of food and being reverred as one of the most sought after institutions to be associated with. In my limited tryst with a few chefs associated with it, it’s the level of commitment and creativity in the subjectivity of cuisine and marrying a few to create ‘nuvo cuisine’ that drives them.

It’s exhilarating to see the passion exuded in the quest for something that is terrifying as well as visually stimulating as some foods do not play well with others. A dish could go completely awry and that’s the risk they take day in and out, to get the perfect concoction. A work of edible art in a matter of speaking. Also another philosophy I truly appreciate is the concept of less is more. Given today’s need to try and sample as much as one can digest in one sitting, emphasis of less is more in a portion- is something they are masters off.

This adds to a lot of creativity as well as a whole rounded meal as a by product, leaving the customer to experience a holistic dining experience while at it.

What is the common thread with modern restaurants today. How do they change things up?

Restauranting today is evolving into an art form for many. Visual appeal is the call for hour in an age of Instagram and social media. ‘Eat with ones eyes‘ is the moniker many restraunteer folk are banking on. And everyone, (self included) is on a Michelin sojourn- to experiment, pair and follow the latest trends of mixing and pairing cuisines from across the world. It’s a format that is adopted which is acceptable to many. Small and precise with immense visual appeal to intice the wow factor in consumers.

Having said that its great to see the level of creativity used to make dining an ‘experience‘ instead of just dishing out voluminous plates of curries and gravies with side garnishes as an after thought measure. The trend indeed,is, in a momentous change for the better.

South East Asian food is always light and healthy. Can we learn from the Thais and Malaysians when it comes to creating healthier and lighter food?

I believe it’s universal. Leaving aside an ethnicity of sorts, many cultures have hidden treasures which are globally adopted. Take for example Greek and Mediterranean food. It’s light. Filled with wholesome goodness from the oils to salads made.

In my opinion, a big error in the past,in the Indian context was the trifecta of oil, sugar & salt and loads of spice plastered across dishes to make it platable for the end consumer. This would be wrong on so many levels as the flavour emitted from certain meats and vegetables would get lost in the preparation. That trend is nearly extinct due to change in pattern of the evolved customer who are adapting to a lighter, less portioned served healthier lifestyle of dishes. The calorie conscious customer is defining the trend these days.

What’s your go to cuisine, apart from Goan food? And if you had a chance to cook just one dish for your culinary idol, what would it be? Are you a good cook, btw?

mr. NObody is a culture vulture. In a current frame of mind, I am fresh off Thai herbs and spices and am tripping on pad Thai noodles- relished at an ashram in Thailand. However right before that I was in love with the simplistic spice rub on a lovely kebab in Abu Dhabi. Thyme and herbs salt rubbed on succulent meats grilled to perfection.

However, I love to experiment with salads and greens as a daily detox diet when I’m not working my tastebuds to the ground. Cooking for my culinary idol is tough one. First and foremost living in a household of food writers and hospitality professionals my writing is under scrutiny let alone my cooking skills.

For those who know me, my love for barbecues is paramount. So it would probably be something on the spit with a refreshing mock tail/cocktail for company. Perhaps a good oriental seasoning rub over a local fish.

A good cook? One and all are invited over and let me know your thoughts post.