We all have dreams. However in order to make them a reality, takes an awful lot of determination, dedication, self-discipline and effort. Stand forth Aakritee & Virendra Sinh of A Reverie. It a feeling of excitement engulfing me, as I pen down the second article dedicated to this dynamic duo and their work of art located in Calangute.

Why second you ask? I arrive at the gates of a restaurant that had the sense of old with the cloak of new. Everything has been redesigned. Only the hallmark of the place remains through the boundary walls that define its existence from a time before. The Dreamer stands right in the middle of the restaurant. One cannot fail to see him. Suspended mid air, gently eavesdropping on bar conversations it makes one sit up and take notice (no pun intended)

This new concept (their dream, in a matter of speaking) has transformed their restaurant with a cutting crisp approach with defined sections ranging from the lounge, the space, the tasting room and the wine experience. All this in the confines of the original space. Those who have been here before would reveal in the transformation taken place for the season.

There is a nip on a cool moonlit night where I happen to dine at this establishment. Virendra and his bar, have been highlighted before. A proud conceptualiser of some of the most exquisite hand picked malts and spirits the world over he spoils one for choice. Having him on the table for company you know your nights going to end in ‘high spirits’.

A special tasting menu hand crafted for mr. NObody was presented. The earthy feeling sets one right at ease, with the clever play of tones from cream to camel hide brown- which lulls one into a trance of being in touch with mother earths roots. A pleasant feeling indeed.

Here’s a serve by serve of a few highlights of the meal.

Peanuts! You gotta love them. Be it Charlie Brown & Snoopy or just your average nut the peanut chaat has a twist on the Goan & Thai tryst balancing the scales. Here it’s a play between peanut and cashewnut tossed in flavors of the region- Thailand and Goa. The herbs used were from their organic garden outback with a few Thai herbs thrown in for good measure. The cashewnut was married to Thai spices as well. (Pro tip: Best consumed with a chilled beer or Single malt for company. Let the spice work your palate and the beverage quench it). 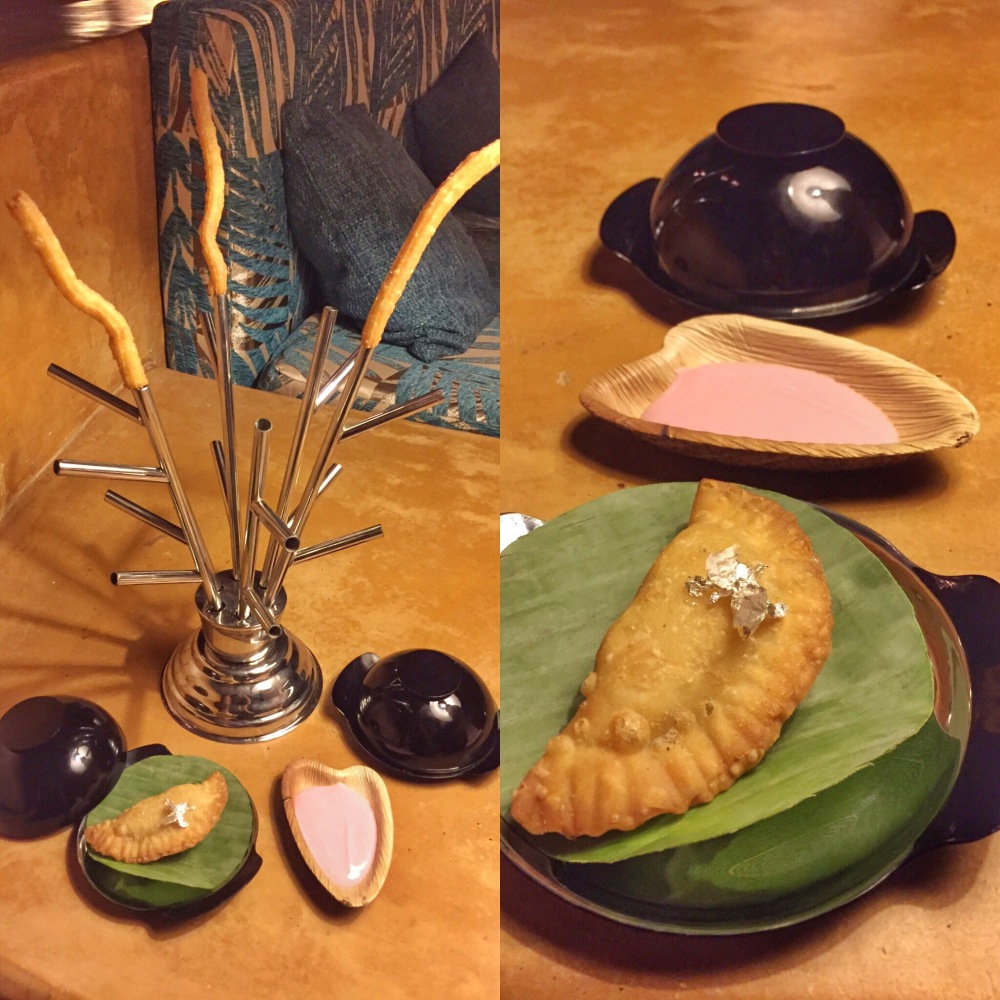 Neureos & Churros. You got to love the combination. Anyone heading over to a good ol’ gathering in ones ancestral village/house, over festive season is bound to sample and savor Neuroes- the goan stuffed answer to the Churros filled with coconut shavings. Churros with their ever crunchy, sugar dusted Spanish origins made the perfect date for this dish. These were Chilli cheese toast filled Neuroes & Churros with beetroot sour cream. (I can see you faces cringe at the blasphemous thought of the absence of chocolate dip- try this. It’s expansive and mind altering…and yes do thank me later)

Oh;this dish indeed was aching for some and then some more. In all honesty, I loved the presentation and the throwback to weddings in goa- especially Catholic ones. With the ritualistic – wine and cake at the toasting of the married couple, this finger food finds its way on the plate as an appetiser in most settings. Their twist was a fish ceviche, Amla & orange water with smoked mackerel (kudos to staying local in the fish selection, quite a dicey fish -this. And fabulously prepared), mayo and what they like to call other stuff. Fun in a pani puri. There is nothing like eating this ‘street food chaat’ in a fine dining restaurant. Redefines the experience entirely.  (Read pani puri at chowpatty. The other stuff is what makes this finger licking good. Kidding! sic) 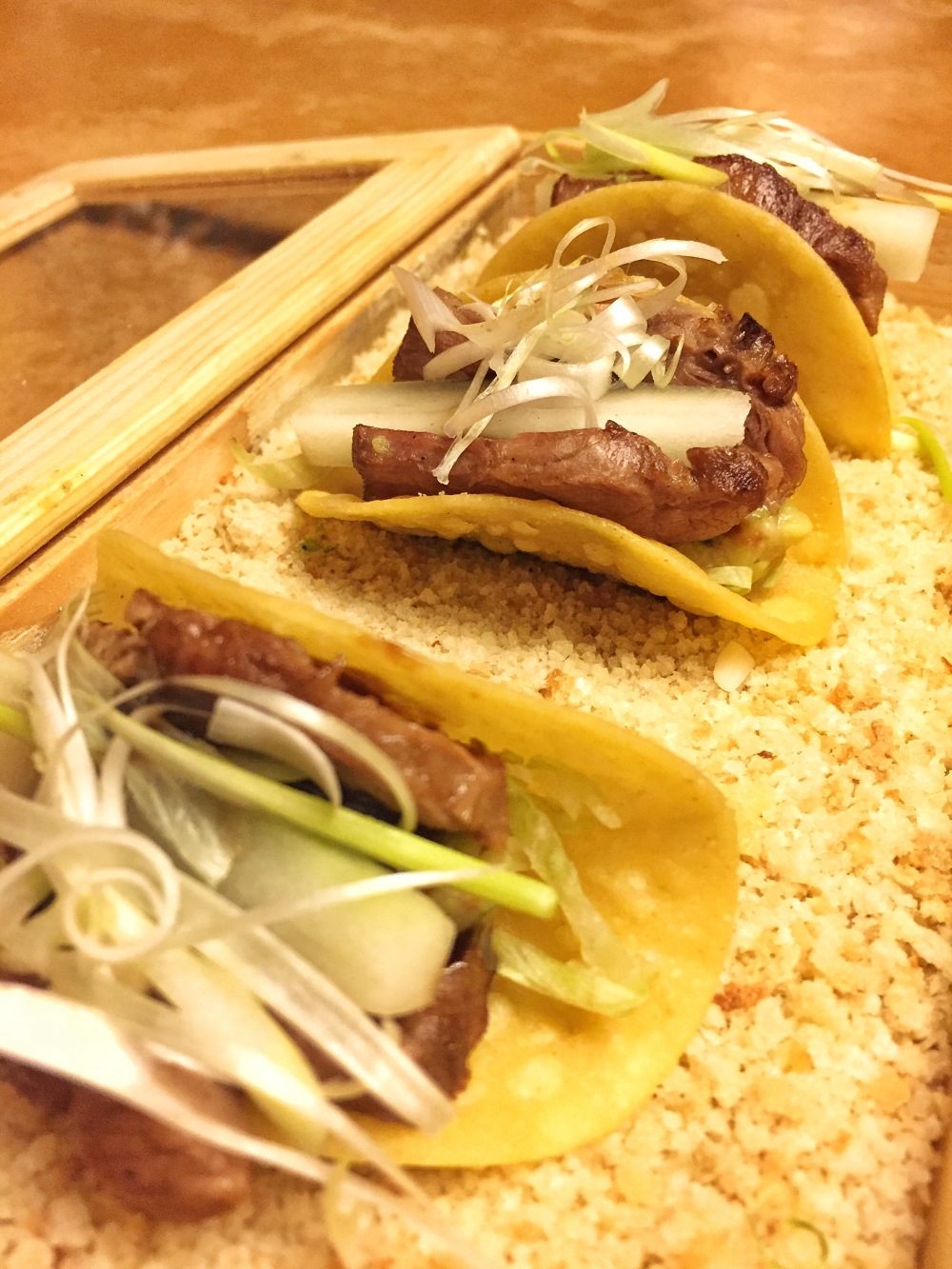 Everytime I hear the word Latino, I go all Ricky ricardo meets Speedy Gonsalves in my head. Sexual, sultry, voluptuous (oh wait we’re talking about food here, back to the basics)…. As I was describing the food is spicy , tangy, soulful and eccentric filled with passion. Aakritee’s madness did not disappoint. Crispy corn tacos (home made at that), French duck breast & hoisin sauce. (My only complaint was not getting more.)

A pause…. NO this is not the intermission, however I am pleasantly surprised to have Aakritee sitting on the table with us for more than 20 minutes ata stretch. In all my seasons of dining at this establishment she is the quintessential butterfly fliting between the kitchen and the table. It’s a surprise to have her nursing a cold with a stiff drink right next to me in animated conversation. I ask her ,whose manning the pass inside?

Out comes; Chef Pablo Miranda. A gentle, yet towering demeanor -don’t let his boyish looks fool you. Under their watchful eyes, he has carved his credentials in a kitchen that was once pilgrimage to the hands of Aakritee herself. Having her relax outdoors is a silent testament of the work being belted out by this gent. A hands on/off approach in a matter of speaking.

Back to more food. 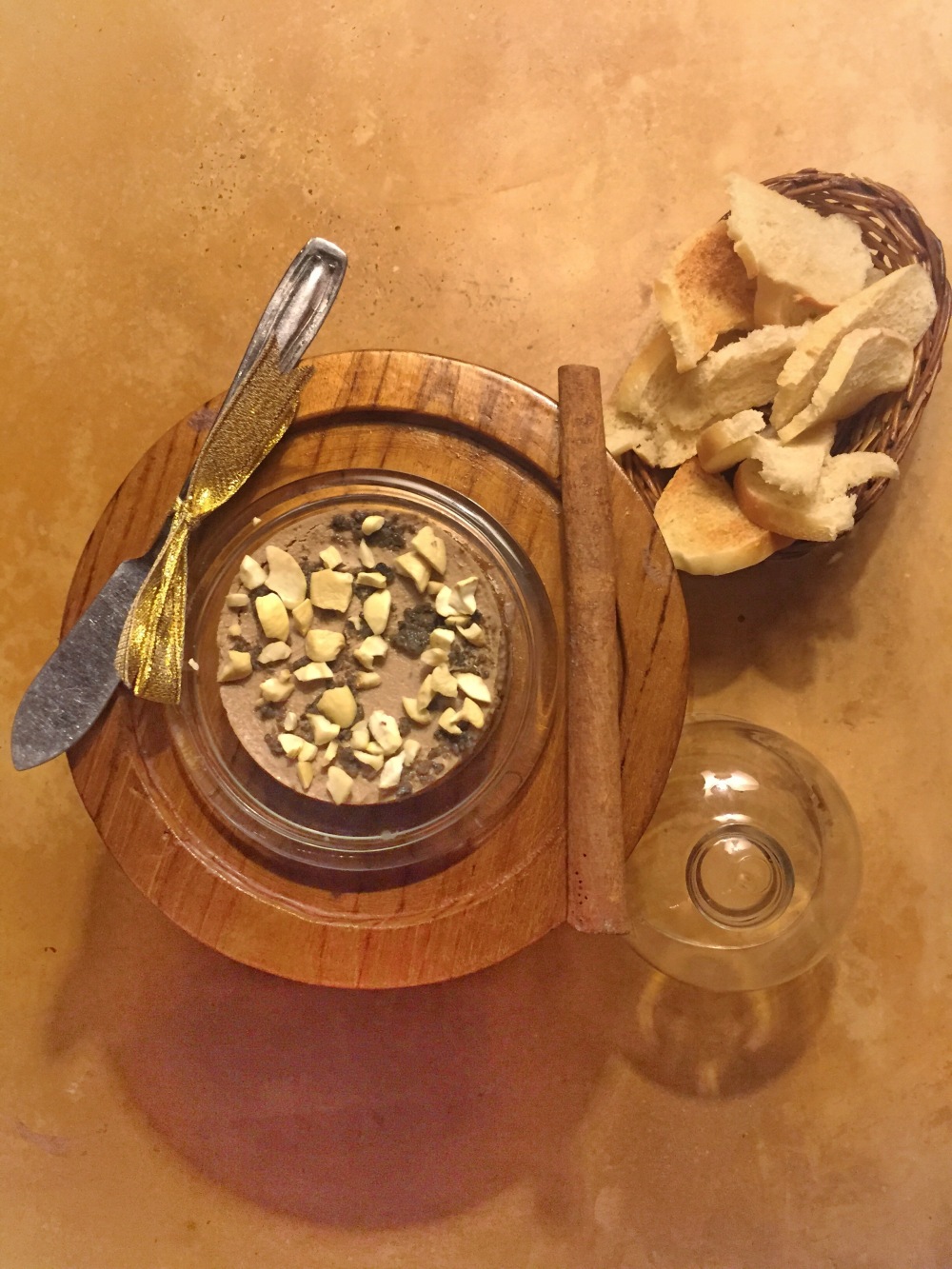 They tout it as their much ‘celebrated’ dish. I would concur. The Cake is a Chicken liver pate with white truffle, onion jam infused with  Goan Port wine no.7. Not stopping at that- Add some black truffle coulis and cashew for company. (I wouldn’t really know how to describe it. You lost me at truffle. A dish so nice you have it twice- white & black indeed; I’ve died and gone to heaven)

More than what Meats the Eye

This would be Porky & Petunia Pig’s (alongside their cousins) worst nightmare, at the delight of the carnivore in you. Aptly titled ‘pork few acts’, one is accompanied by a Belgian pork loin chop with hickory BBQ & GOAN bankal glaze. This double act is accompanied by Goan farm bred pork loin with a homemade mustard rub & mashed potatoes with Canadian bacon (re-salivation moment) and toddy fermented sauerkraut, sautéed vegetables & beetroot sour cream. I love the mad scientist at play working on so many classics with GOAN influences. It’s a tough act to pull and this was done ever so well. Kudos.

Wake Up & Smell the Coffee

Aptly described – it’s Coffee nirvana meets Lovers Paradise atop Gulliver’s Peak on an island far away. Espresso yourself indeed, is what constitutes the espresso ice cream, Columbian Coffee soil & Jamaican coffee truffle. That’s the first start to get your senses riled up. Round two heads to coffeeology intoxiology , a delicately balanced tiramisu with Goan coffee liqueur. Wait we’re not done yet. The third consumption is coffee jar- Coorg coffee creme anglaise, goan serradura custard with panko saw dust. And we top it off with the humidor- a Javanese coffee waffle cigar.

Aptly described as Reconstruct post a deconstruct of the Classic Banoffee Pie. Part of the trifecta is the first morsel is a smoking hot ‘chilled’ out sundae- which is ‘smoke’, banana ice cream, toffee sauce, condensed milk ice cream and cookie crumbs.

Once you have satiated your senses you move over to ‘the humble pie’- (not so humble) A wafer thin chocolate Mille-feuilles, bananas topped with rum cream and strawberries. (Pro tip: try and consume in a single morsel to avoid making a faux pas of the event through spillage)

And what better way post the decadence, than to reach out to the land of milk and honey, with deep fried churros with reduced milk dip & honeycomb with an edible bumblebee. Mind you, the honeycomb wafer is pure unadulterated sin straight from an actual beehive!!

As I struggle to depart with the war of food battling inside, the Dreamer looks pleased. Here’s to the future, one which belongs to those who believe in the beauty of their dreams.
Image courtesy: Nolan Mascarenhas Photography  Shot on Iphone6