I assure you this is not a new language I’m making one learn. Though, the pronunciation has got my goat as much as the grape that almost went down my wind pipe in the quest to get it right. It’s a quirk, I tell you. After all, one can never really digest a good meal if it ain’t articulated well enough. Right?

Ever played tongue twister? Try these two words ‘Ceviche’ & ‘Pisco’ in a single sentence and you get where I’m headed with this. Enough about words and moving over to the food at hand. The lovely Palms, set with multi-elevated deck-spheres, the décor is rustic and minimalist while capturing the essence of the picturesque tropical surroundings and the spectacular view of the pristine shores of Arossim beach @ the Park Hyatt Goa recently inaugurated a Peruvian menu at the hands of Chef extraordinaire-Bruno Andres Santa Cruz from the Hyatt Regency, Istanbul. As much as i wanted to concentrate on the food we got on like a house on fire during the meal, and were liking each other’s Instagram posts. Such a fun lovable character. 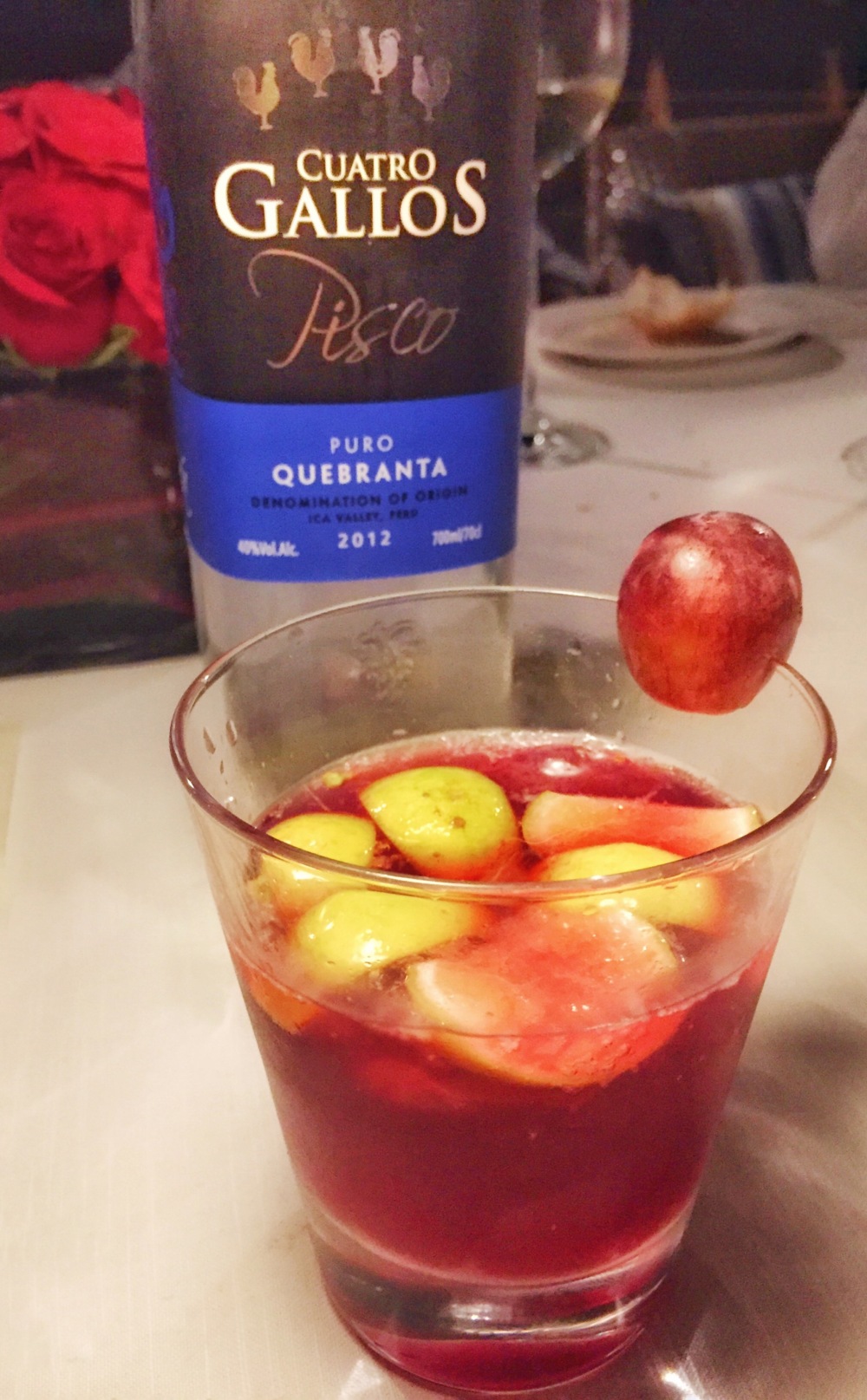 Have you tried Pisco? It is a colourless or yellowish-to-amber coloured brandy produced in winemaking regions of Peru and Chile, and is bloody potent. Made by distilling grape wine into a high-proof spirit, it was developed by 16th century Spanish settlers as an alternative to orujo, a pomace brandy that was being imported from Spain. I had it neat as well as this deadly concoction aptly called Capitan, being distilled fruitiness at its best. The Capitan is a potent refreshing cocktail with a pisco base, mixed with an infusion of grape juice and lemon with loads of crushed ice. Now, while the crushed ice dilutes the potency eventually, I was nursing a irritable throat hence sans ice made me reach a lot closer to the moon and stars that evening than intended.

Ceviche (pronounced “seh-VEE-chay”) is a Latin American recipe for raw fish and seafood marinated in citrus juice, mainly lime and lemon juice. The acid in the citrus juice coagulates the proteins in the fish, effectively cooking it. It is a seafood dish popular in the coastal regions of Latin America. Additional seasonings, such as chopped onions, salt, and cilantro, may also be added. Ceviche is usually accompanied by side dishes that complement its flavors, such as sweet potato, lettuce, corn, avocado or plantain. Because the protein is cooked by the acid, ceviche isn’t heated, so it’s served cold or at room temperature.Other ingredients in ceviche typically include tomatoes, onions, chiles and cilantro.  As the dish is not cooked with heat, it must be prepared fresh to minimize the risk of food poisoning. It is light, citrusy, succulent and piquant in all the right proportions.

Mussels & sweet corn on a bed of shaved ice 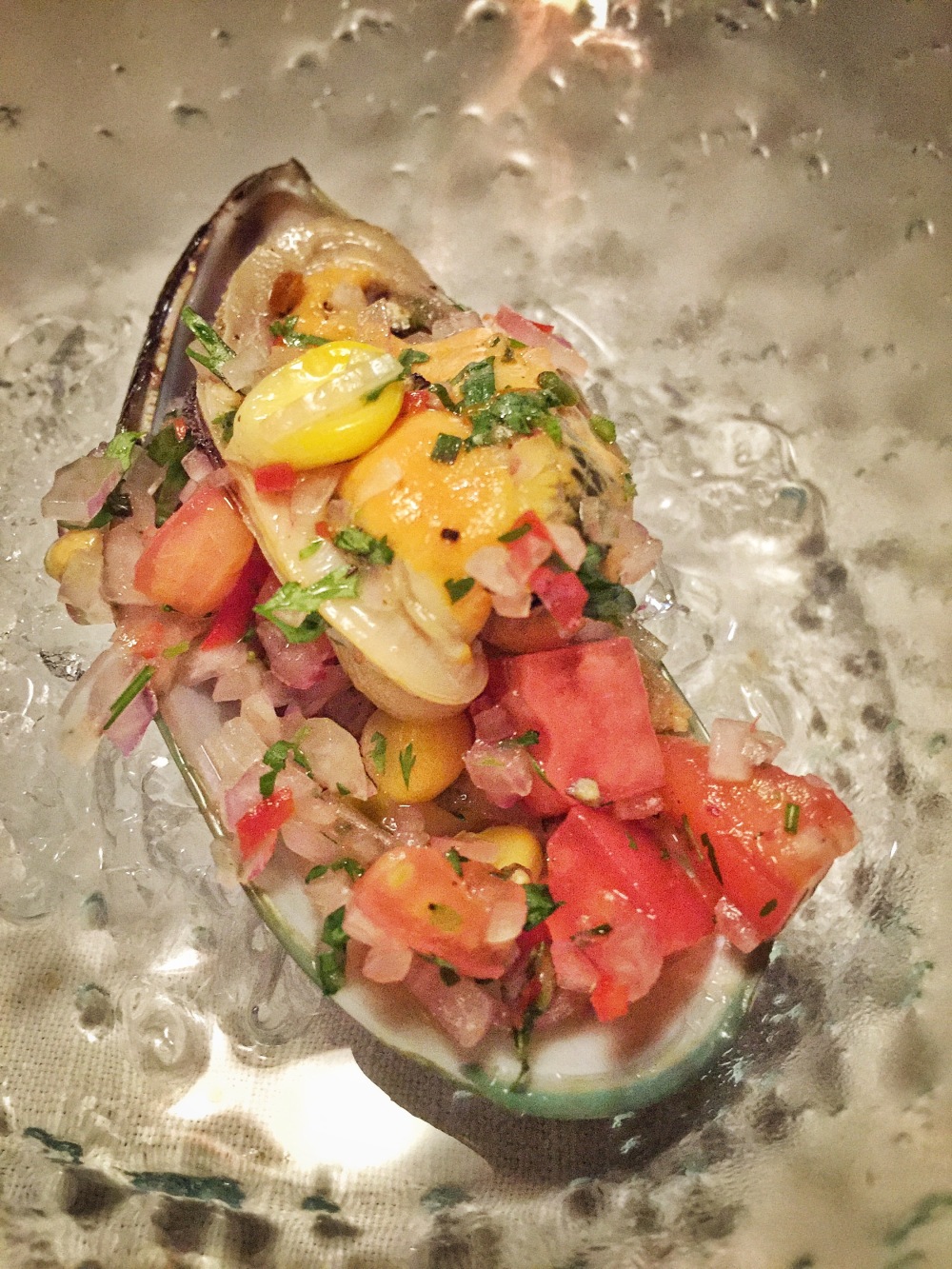 There’s no single recipe for ceviche, and many different fish and shellfish can be used in preparing it. Snapper, sea bass, halibut, mah-mahi and tilapia are popular fish for making ceviche. Other seafood components can include shrimp, scallops, squid and octopus.

Did you know? Along with an archaeological record suggesting the consumption of a food similar to ceviche nearly 2,000 years ago, historians believe the predecessor to the dish was brought to Peru by Moorish women from Granada, who accompanied the Spanish conquistadors and colonizers, and this dish eventually evolved into what now is considered ceviche. In Peru, ceviche has been declared to be part of Peru’s “national heritage” and has even had a holiday declared in its honor. The classic Peruvian ceviche is composed of chunks of raw fish, marinated in freshly squeezed key lime or bitter orange (naranja agria) juice, with sliced onions, chili peppers, salt and pepper. Corvina or cebo (sea bass) was the fish traditionally used. The mixture was traditionally marinated for several hours and served at room temperature, with chunks of corn-on-the-cob, and slices of cooked sweet potato.

The modern version of Peruvian ceviche, which is similar to the method used in making Japanese sashimi, consists of fish marinated for a few minutes and served promptly. It was developed in the 1970s by Peruvian-Japanese chefs including Dario Matsufuji and Humberto Sato. Many Peruvian cevicherías serve a small glass of the marinade (as an appetizer) along with the fish, which is called leche de tigre (tigers milk).

So while we reveal in the art juggling delightful consumption and pronunciation I shall have the Capitan keep me company on this crescent moon light night and I bid thee well.