“Mr. Mascarenhas, You have a date tonight. It’s a double date.” That messaged accompanied the invite, to pique my curiosity and head over to the Grand Hyatt Goa. The weather played sport and waited till I got there in my fancy shoes (they were Zara rust pink slip-ons, yes! metrosexual much? Indeed and proud dahlings!!!) which I decided to take out of hibernation for my ‘epic’ night. I arrive on time to be greeted by two bubbly and affable hosts Miriam & Diana, who with a glint in their eyes escort me over to the bar to present their concept –Fondue evenings– The Cheese and Chocolate Fondue (double date indeed…jackpot!!)

Fondue is not new (pardon the rhyme, it’s not intentional) to Goa but at the moment places doing it (if any) are seldom few (sigh what a pity) And I love a good Fondue, don’t you? (I did it again, trust me- it is the bard in me taking centre stage after all those glasses of exotic wines) The moment calls for a flashback- to the time I travelled to the Alps.There are a few things that are quintessentially Swiss and come to mind immediately at the mention of that fabulous country -cheese, the oh-so-sinful Swiss chocolate, and fondue! My historian guide at the time educated me through a chapter in history –its name derived from the French word fondue – meaning ‘to melt or to blend’. The frigid Swiss winter snow covered mountain valleys, isolated villages and towns were hard on one and all. Consequently fresh food became scarce and had the towns people to rely upon locally made foods.The local villagers discovered that if they melted their cheese with wine, garlic, and herbs and dipped the stale bread into the mixture, the bread would soften (became hard from the cold and difficult to eat).The cheese was melted in a earthenware pot called the caquelon. Although communal eating from one pot can imply a shortage of cooking equipment and utensils among the poorer peasants, it was a symbol of community dining. Each person kept their corner of the pot showing consideration and kinship, a Swiss custom still respected to this day.

Did you know:A cheese fondue mixture should be kept warm enough to keep the fondue smooth and liquid but not so hot that it burns. If the temperature is held until the fondue is finished there will be a thin crust of toasted (not burnt) cheese at the bottom of the caquelon. This is called la religieuse (French for the nun). It has the texture of a cracker and is almost always lifted out and eaten. Try and get hold of this post your fondue. That cracker of crispy melted solidified cheese is to die for.

Back to our table, I requested if the menu could be spaced in order to savor the tastes and drink away the painful thought of all the calories to be gained with every swirl. After all, given the offerings on hand this meal had to be planned efficiently. I decided to pair my wine with the fondue on offer, so I narrowed it down from the ones on offer from various regions of the world- the Lagarde Classico Sauvignon blanc from Argentina, a Neil Joubert Chardonnay from South Africa, Jospeh drouhin la foret Bourgogne blanc from Burgandy France,the Oxford landing Sauvignon blanc from South  Australia, the fruili grave, pinot Grigio – Italy or the Torres vina esmeralda muscatel from Catalonia Spain. An exotic selection to choose from which would put Hemingway in a tizz as well I suppose. (now do you see the need for planning?)

The devil plays back door advocate in the subtle blink-and-miss accompaniments which does overpower ones senses ranging from crusty garlic herb baguettes to cherry tomatoes and celery sticks to green apples, black olives, gherkins and pickled baby onions for that extra crunch. And to the fondue itself on offer ranges from the essential Three cheese (emmental, cheddar, Dutch edam cheese, cheddar,garlic swirled with white wine) to the classic Blue Cheese (Danish blue with its peculiar distinctive taste) to the must try Chili Cheese (English cheddar, chili, garlic with white wine). A statutory note: Each serving comfortably serves 4 so the key imperative word is ‘plan‘ your meal.

Fondue became a fad in American in the ’60s and ’70s after it was brought back by a jet setter who had it on a ski holiday. It was the Americans that then invented chocolate fondue.

The meal was scrumptious. At the hands of Chef de cuisine Narasinh Kamath, a careful selection was advised and each offering had him pause to give a glimpse of the process of his creations.Very informative indeed.

It is imperative to keep place for what I would term a decadent affair!! The Yin-yang fondue. A work of art and the urge to disrupt the beauty in it makes you cringe with your first swirl. It’s a beautiful mix of white and dark chocolate- a perfect blended balance indeed. If this concoction does not get your head in a whirl dont miss the accompaniments ranging from chocolate brownies, fresh bananas, rock melon and pineapple (for the health conscious folk) marshmallows, moist carrot cake, gooey filled cream puffs and signature cookie nuts. All this topped with the choicest of liqueurs from the cartron cacao, baileys served on ice, sinful kahlua & amaretto to name a few. Sin indeed. ( I can see my trainer grinning as she chalks out my next torturous gym routine tomorrow) 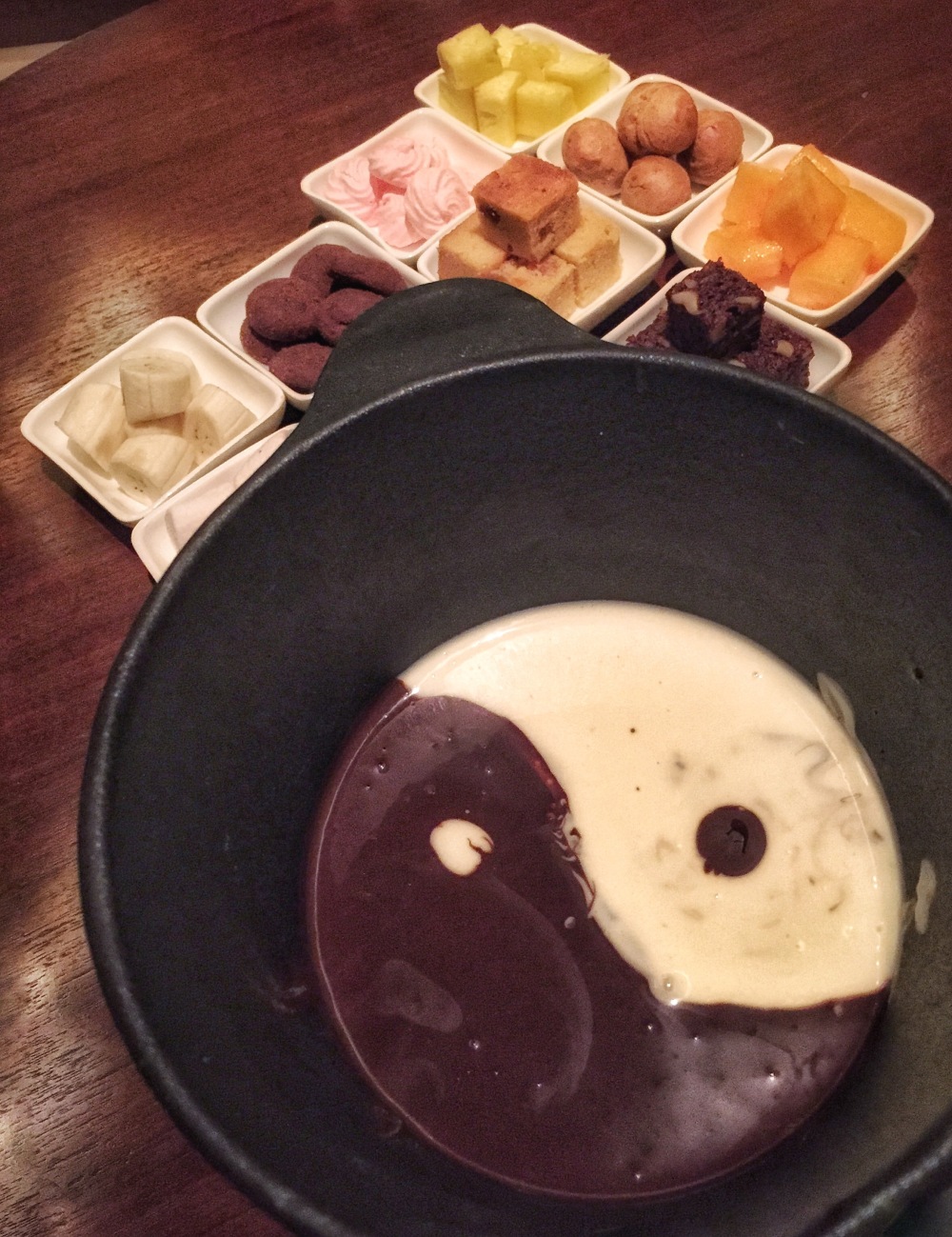 Whatever you do, try not to lose your bread or cookie in the pot! It’s a tradition that if a man drops his piece of bread in the fondue pot, a round of drinks must be purchased for the entire table. (Quite the expensive affair)However if a woman loses her bread in the pot, she must kiss all her neighbors. That’s something you boys could look forward to with heated prayer (no pun intended)

Swirl away with the pitter patter of harmonic drops on the window pane.