This is a story about a cat. His name?-Gatto. Much like Puss in boots this cat is quite the adventurer. He likes to occasionally scoot across rooms being chased by his own shadow. His biggest mystery is trying to capture the red dot on the floor (laser tag) that is non existent except on demand. His biggest trick is chasing his own tail and nibbling on your toes unsuspecting. And let’s not forget to mention his famous south paw. He’s mastered the art wherein you would never see it coming!

I’be never really been a cat person till i adopted a Persian called Cupcake June  and since then let’s just say I was CAT NAPPED post.  I’m an addict to their existence these days.

Gatto in Italian literally means cat. I love the simplicity of identity association. While I was of the opinion that he took quite a fondness to me realisation dawned later on that the smell of my female cat was driving his hormones into overdrive. Let me rephrase -Overdrive would be an understatement.

So me and my dear friend Maria who always loves the pamper me with I-ta-lian hospitality every time I meet her offered me a negroni.

The negroni -is a cocktail made of one part gin, one part vermouth rosso (red-semi sweet) and one part Campari garnished with orange peel for that after kick citric zing. It is considered an aperitif. Legend has it being invented in Florence Italy -1919 at Cafe Casoni now Caffe Cavalli. Named after Count Camillo Negroni tasked his bartender to strengthen his favourite cocktail, the Americano by adding gin instead of normal sofa water used.

Known for my quest to try anything adventurous I decide to partake though it was unfamiliar territory. I’m also of the firm belief that when ordering an ‘exotic drink’ one has to be in a frame of mind. Hence certain drinks are made for certain moments -Like a chilled beer on a hot day or a whiskey over the blues it’s the drink that compliments your mind set. Gatto had no mind to let me enjoy this drink in peace.

What carried forward over the next 30 minutes was a sight indeed. Our dear ‘cat’ stealthy crisscrosses over the table with the rouse of discovery unassuming but of course. And then slowly starts lapping my negroni!!!

Maria and myself are in animate conversation when I am pointed towards this act with Gatto cheekishly looking at me with the – I won you lost after thought. Triumphant he decided to scoot across to his master and relax. What unfurled is for all the see in the sequence of events that followed.

In this case I’m guessing Gatto’s last thought would have been a contemplation of nine livers vs nine lives.

Who me? Noooo… the dog did it!! Honest 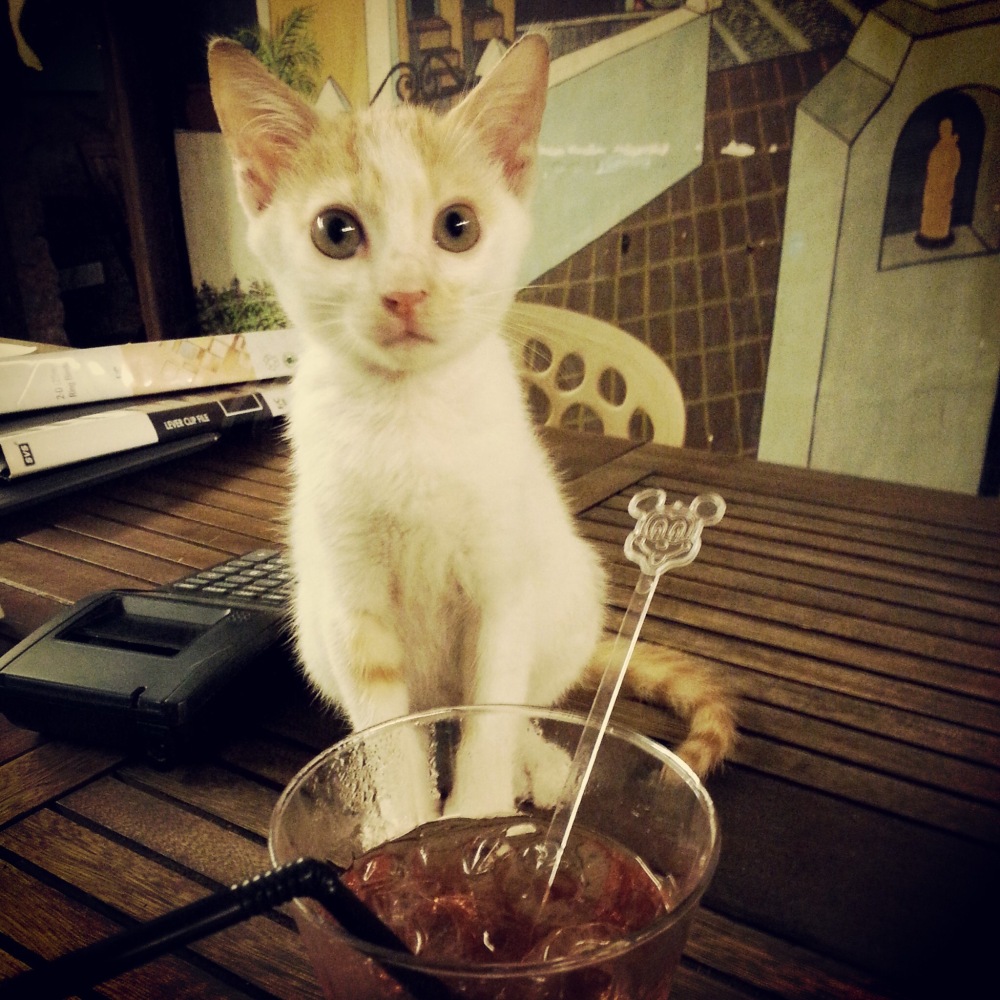